Find this article at:
go.ncsu.edu/readext?805046
— Written By Sandy Hall and last updated by Barbara Monk 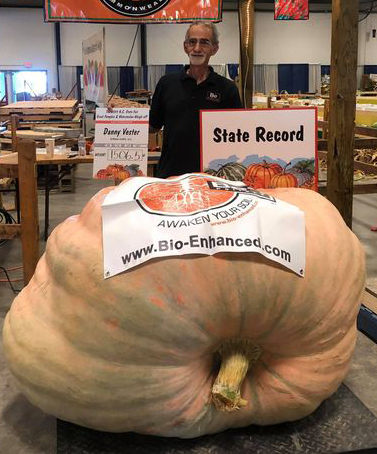 Earlier this year the Nash County 4-H office connected with Mr. Danny Vester from Spring Hope to assist us with a Growing Giant Pumpkins project. A Spring Hope native, Mr. Vester, is known for doing things big – very big. For years he has shattered records, including his own, by growing giant pumpkins, as well as other varieties of melons and gourds. In 2019, his monster pumpkin not only was the heavyweight at the North Carolina State Fair weighing in at 1506.5 lbs – it was also a new North Carolina state record. Then Mr. Vester had another one that weighed in over 1600 lbs at the 2020 Spring Hope Pumpkin Festival. So keep an eye out in the Expo Building at the 2021 North Carolina State Fair. He will no doubt be there with another record-breaking melon of some sort!

In May Mr. Vester provided about a dozen (Atlantic) Giant Pumpkin starter plants and briefed us on the fundamentals of Growing the Giants for some interested 4-H’ers to try their hand at growing, plus, he provided one for our office. We planted that one, in mid-May, here at the Nash County Arboretum.

The one here at the Arboretum was tended to daily and below is a timeline of how our Giant Pumpkin is progressing. And, here’s where it all ended up. We are so proud of the end result – a whopping 910 lbs!!!!!!! 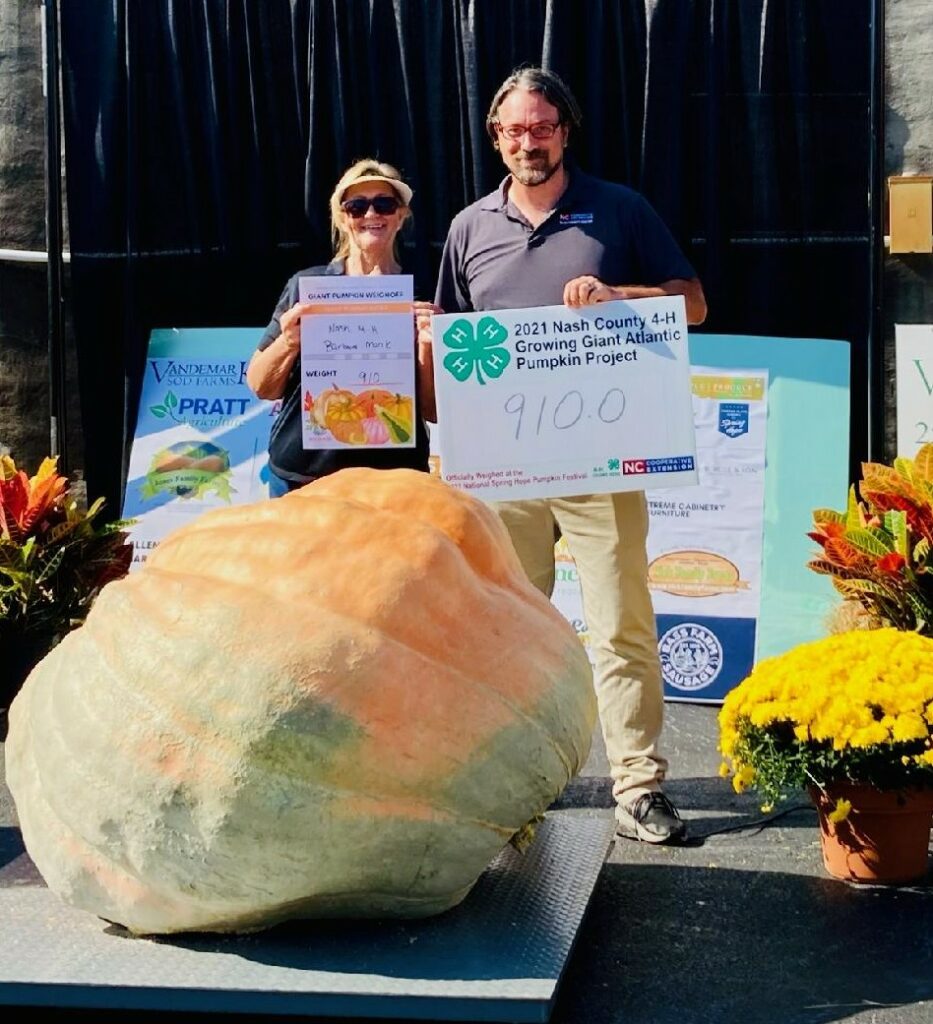 Check out the weekly progress from the planting of the starter plant in mid-May to the weigh-in at the Spring Hope Pumpkin Festival on Saturday, October 2. 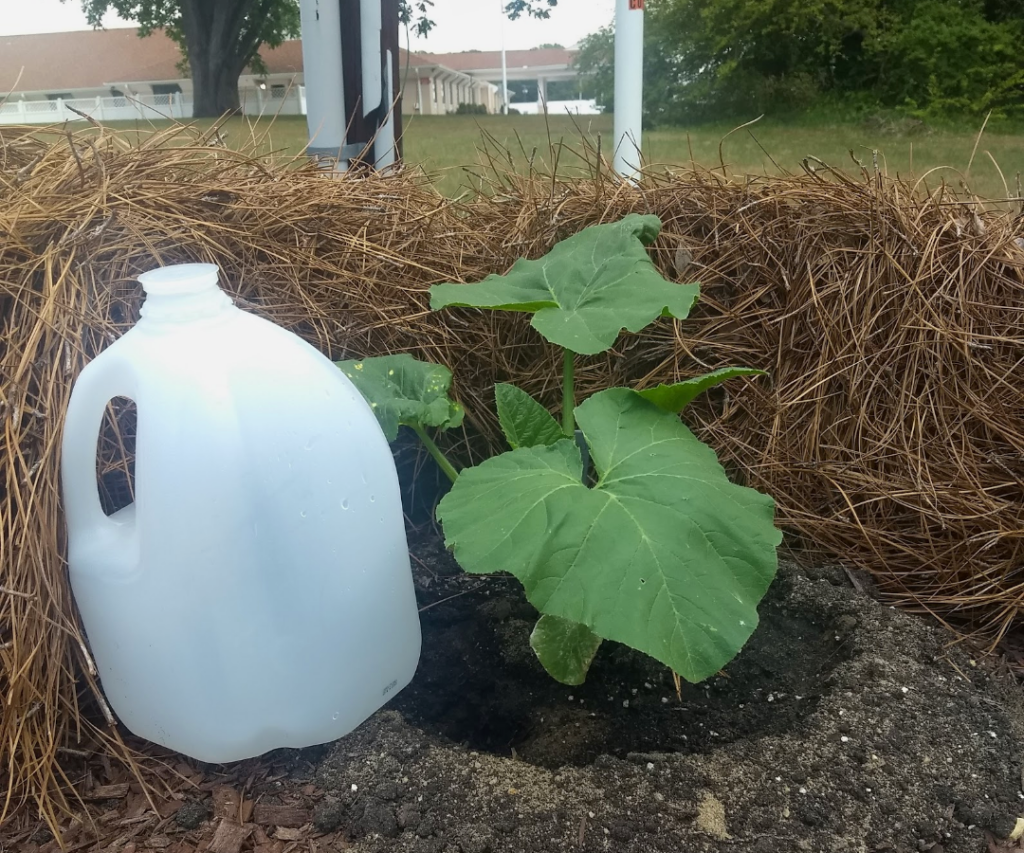 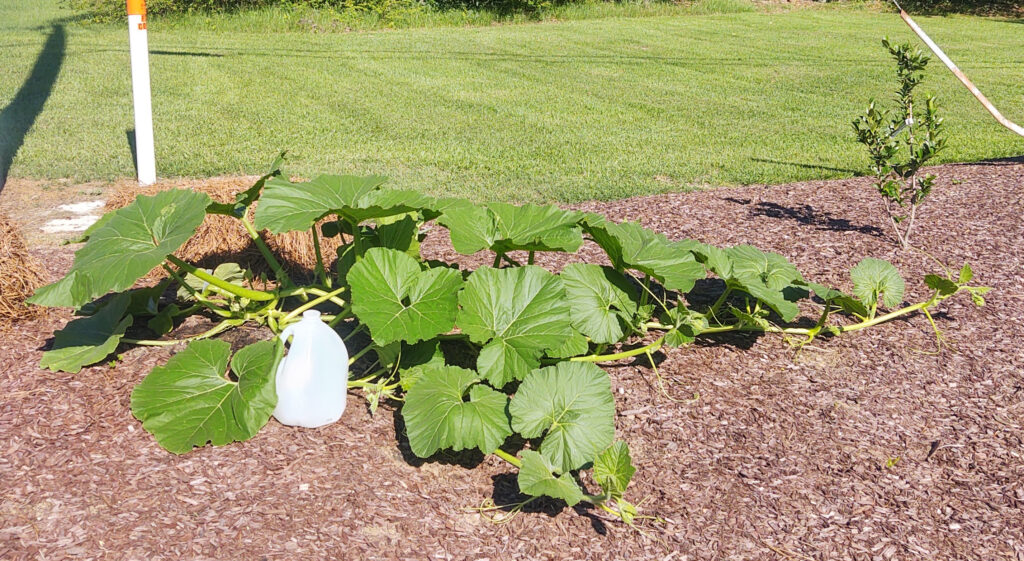 And the first runner appeared around June 9 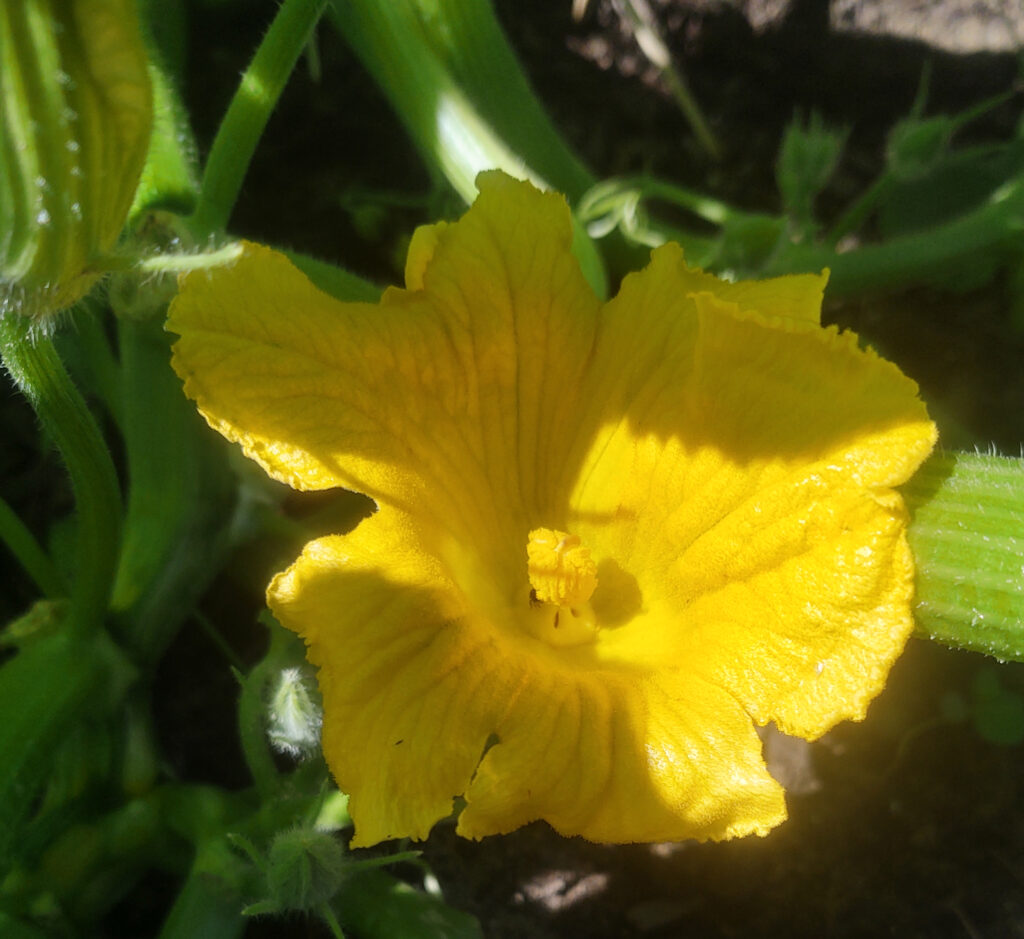 By June 15 another runner had reached out on the right side bringing the overall width of the plant to over 6 feet. At that time we also had about 12 male blooms. 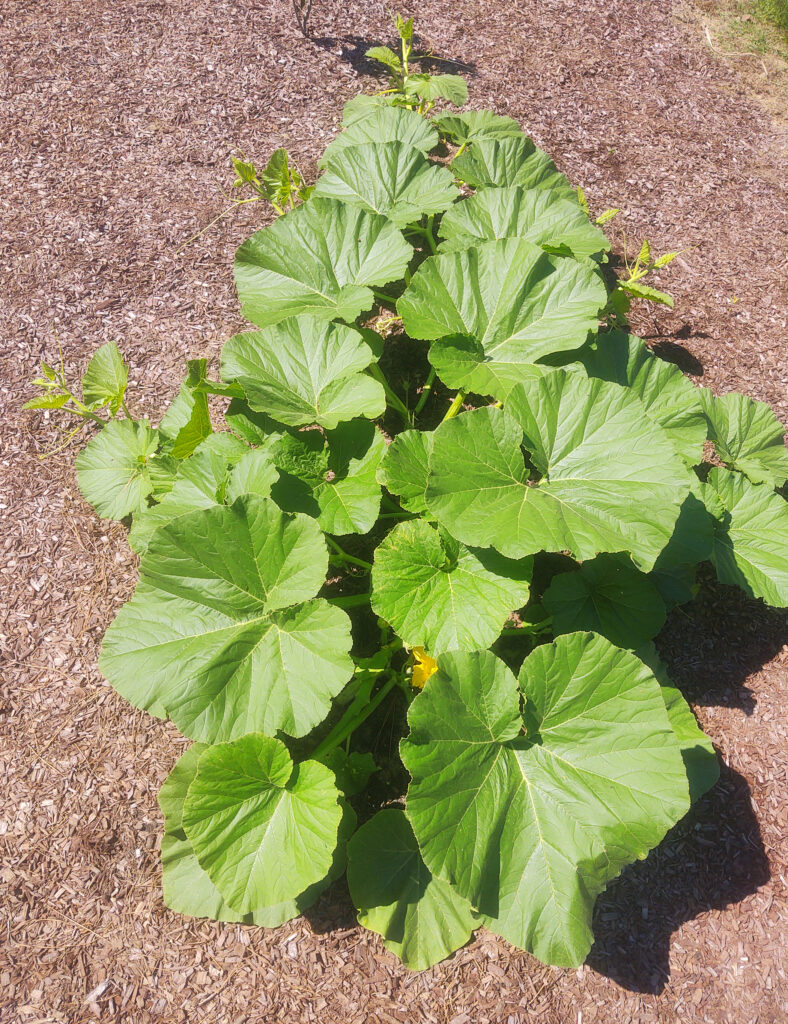 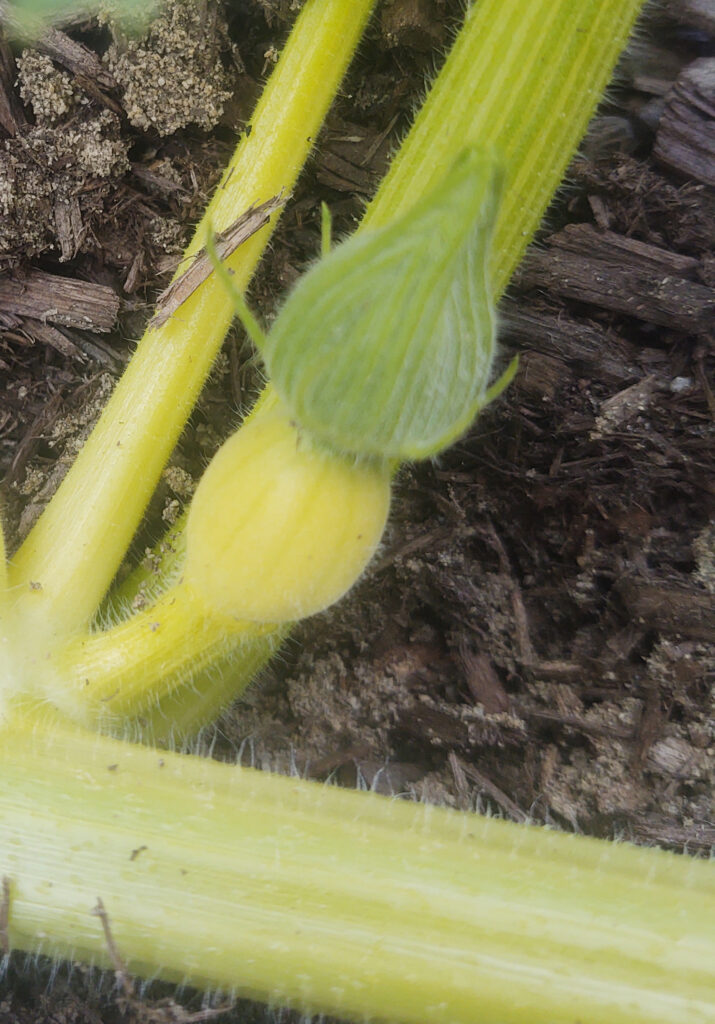 Less than a week later, on June 22 the plant runners were now measuring over 12 feet in width and there are several female flowers (with baby pumpkins). The tendrils have been trimmed to assure the nutrients are directed to the runners and the runners have been staked to manage the direction of plant growth. 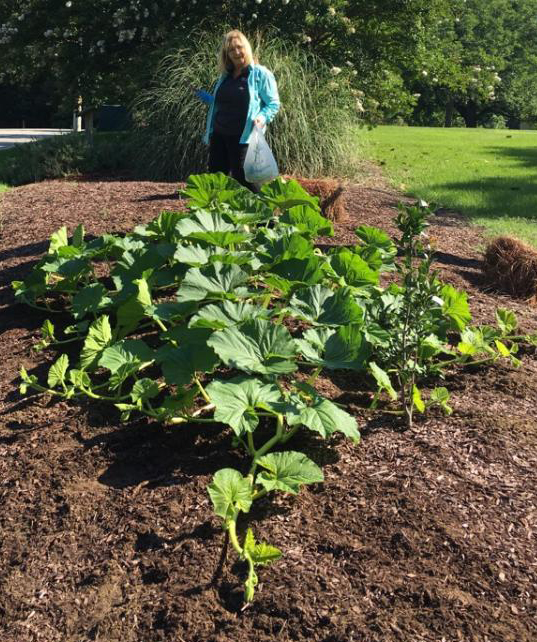 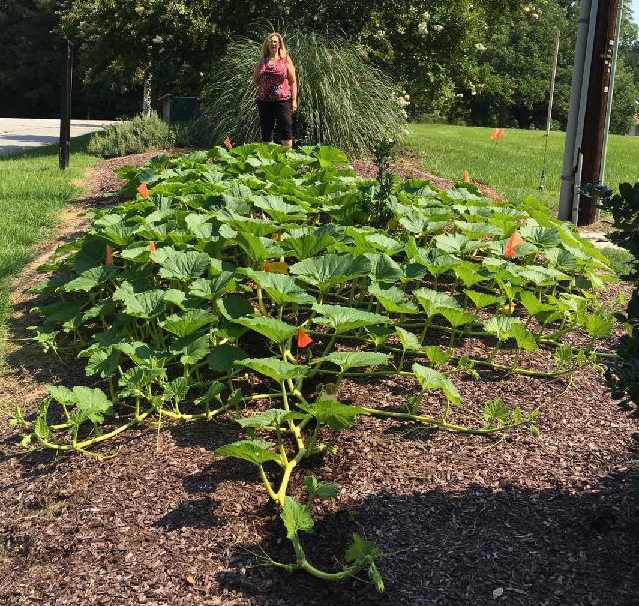 The Giant Pumpkin plant just keeps getting bigger and bigger and the runners now expand more than 30 feet in length from one end to the other. There are several small pumpkins forming on many of the runners. The bees are just buzzing around the plant doing their amazing job. Here’s what things are looking like this week.

Our plant is now just under 40ft long. We have established which pumpkin we are going to keep and removed the rest of the small pumpkins to assure every last nutrient and water supply goes to our one pumpkin. Below is what our baby giant pumpkin looked like today. If we had to guess it probably weighs about 10 pounds. Stay tuned to watch it grow. 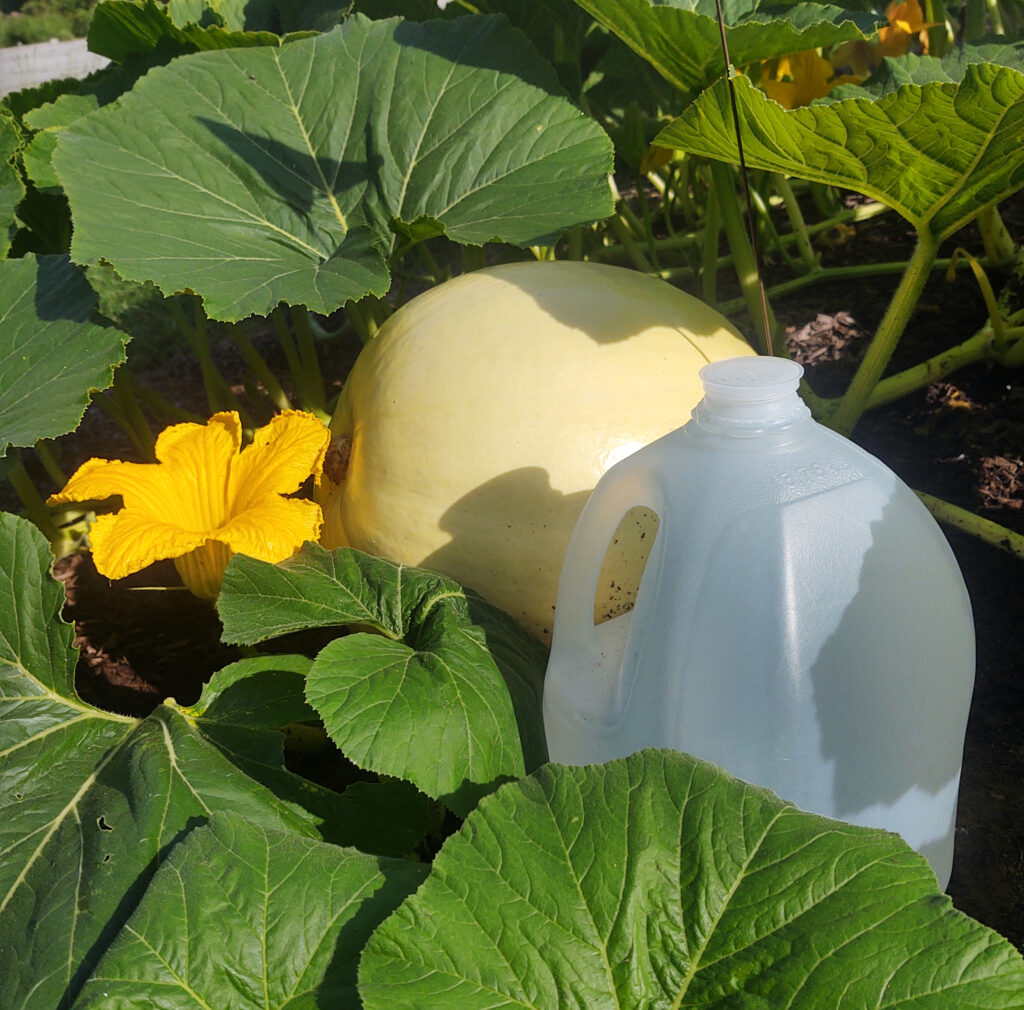 The plant has exceeded 45ft long and our pumpkin is growing and increasing in size and weight. Mr. Vester and Matt Stevens, our Horticulture Agent, lifted the pumpkin and placed it on a pallet to avoid contact with the soil and help keep it from rotting. We are guessing the pumpkin is at about 80lbs. Next week we will begin to measure the pumpkin to provide a more accurate weight. Here’s what it looked like this morning. 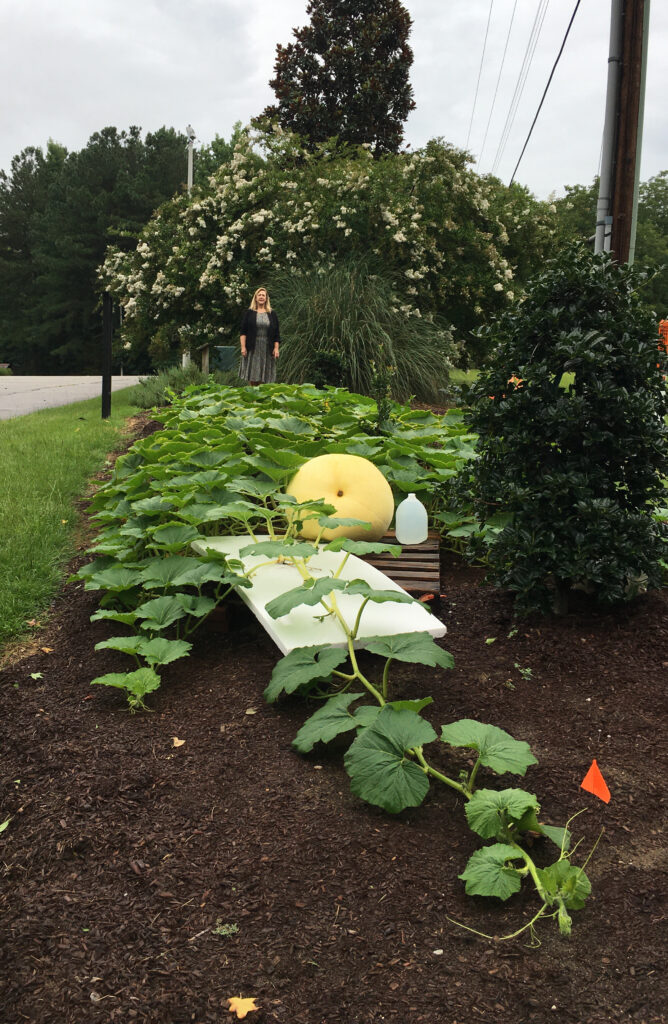 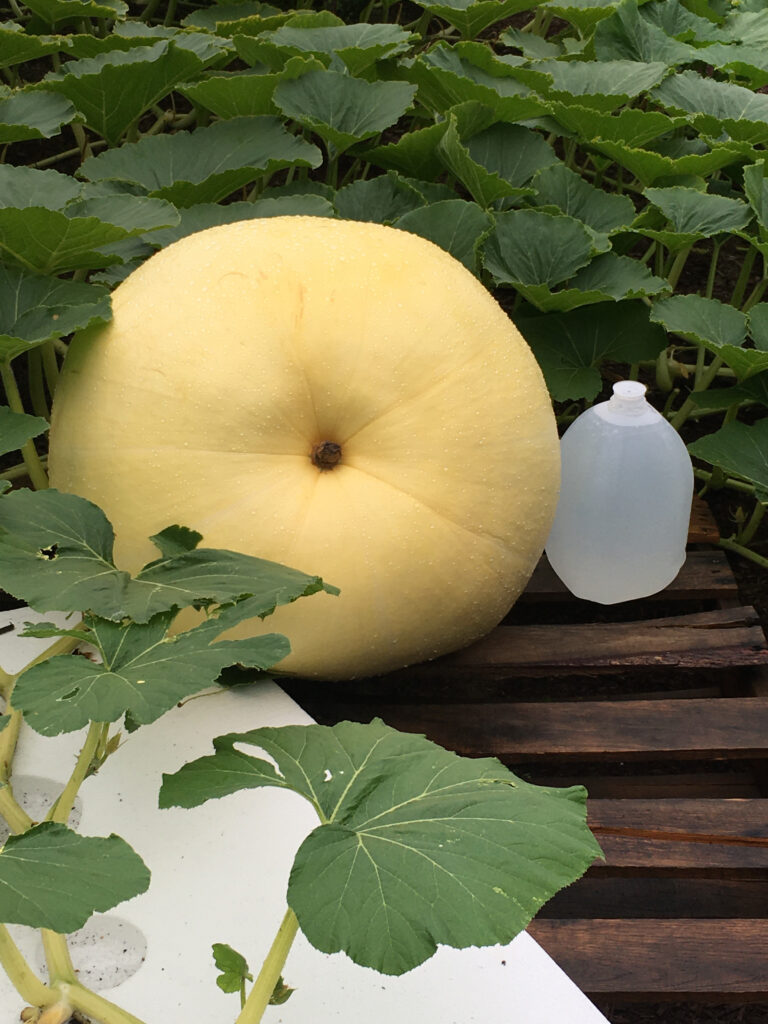 A plywood board was inserted under the pumpkin to assure the shape is maintained and it doesn’t grow into the slats of the palette. Sand was spread under and around the bottom to help keep the skin of the fruit dry and a tent was added to avoid any blistering from the sun. We measured it and based on the overall measurements and chart the pumpkin weighs 149 lbs. as of today. 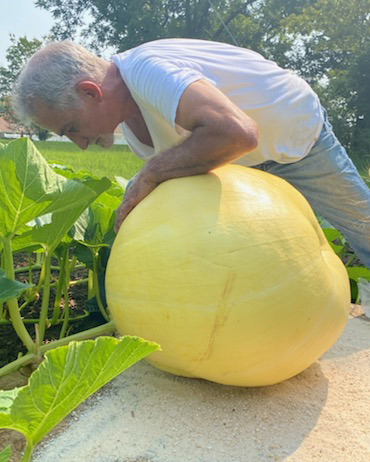 Based on the overall measurements this morning the pumpkin now weighs 227 lbs. 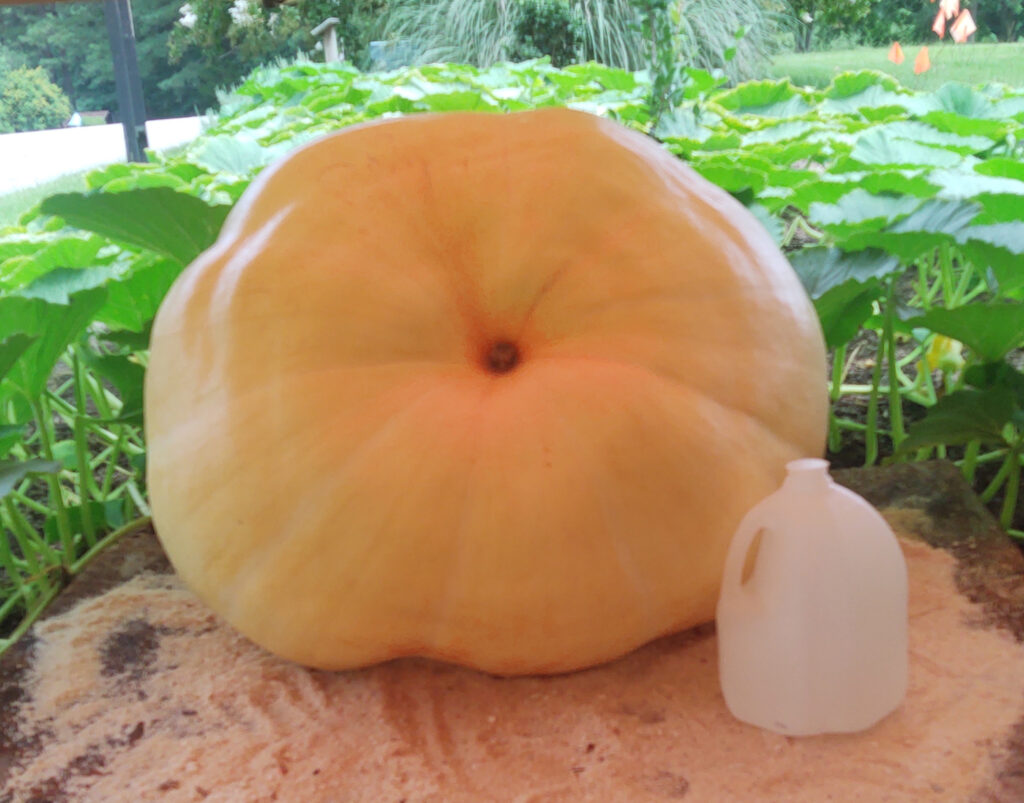 Check out this awesome 4-H’ers pumpkin below. Congratulations to Walton and Nola for taking such good care and growing one of the GIANT ones! Weighing in at 108 lbs 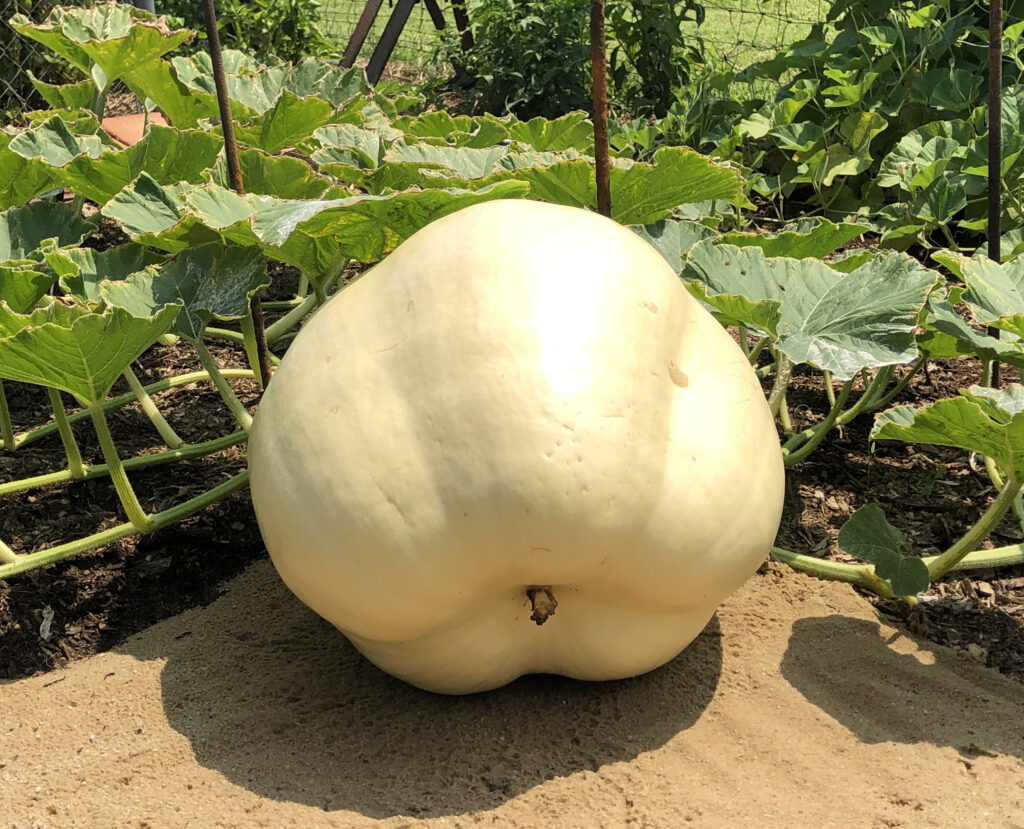 Here we are at the Nash County Arboretum and based on the overall measurements this morning the pumpkin now weighs 404 lbs and is gaining approximately 20 lbs per day. 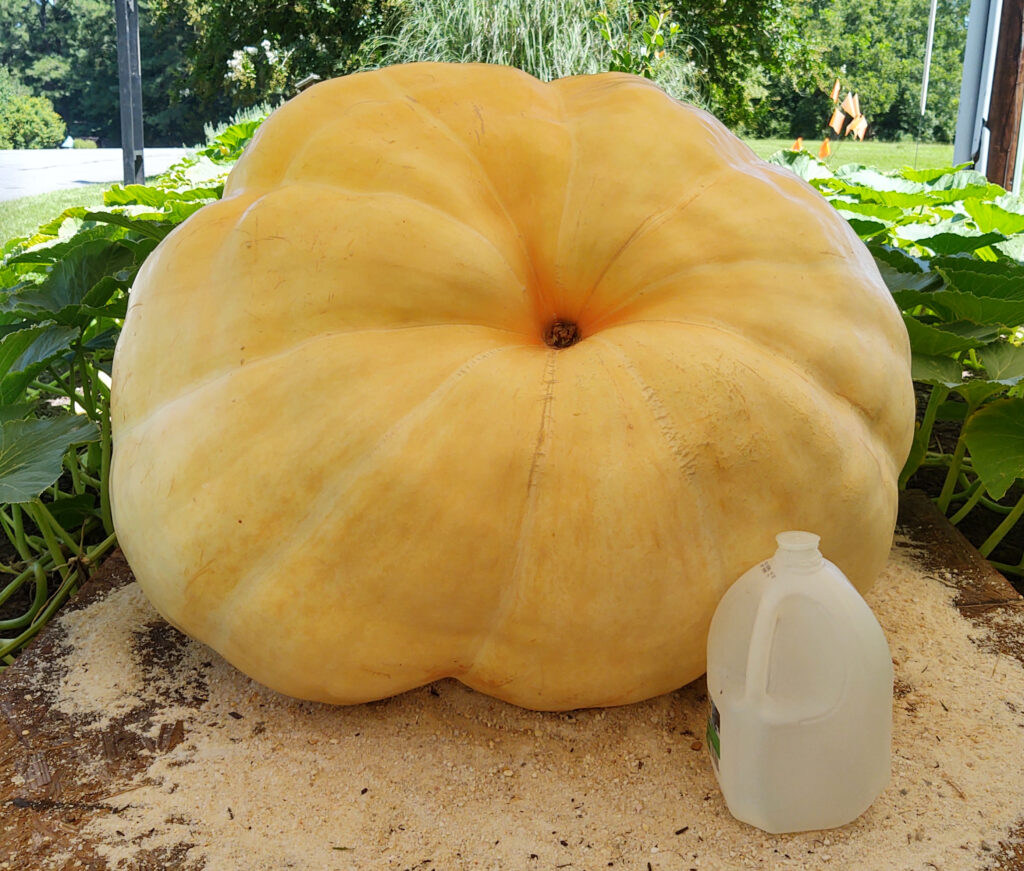 Our pumpkin now weighs 454 lbs. We have observed many leaves that are showing signs of Downy Mildew and Powdery Mildew  – common funguses that affect a wide variety of plants – squashes, cucumbers, etc. Affected leaves have been removed and Matt Stevens, Horticulture Agent, will be treating the leaves of the plant with a fungicide to help prevent the spread and production of new more mildew. 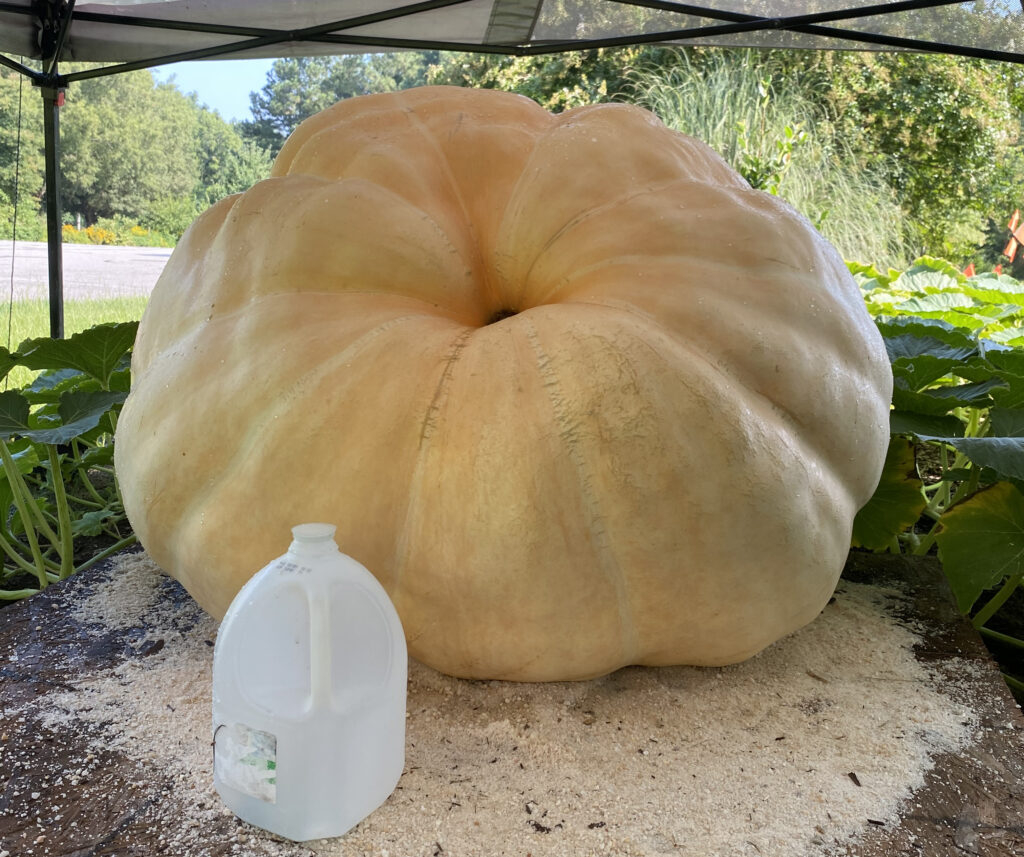 Our pumpkin now weighs 512 lbs. The pumpkin is holding steady with a daily weight gain around 20 lbs per day. 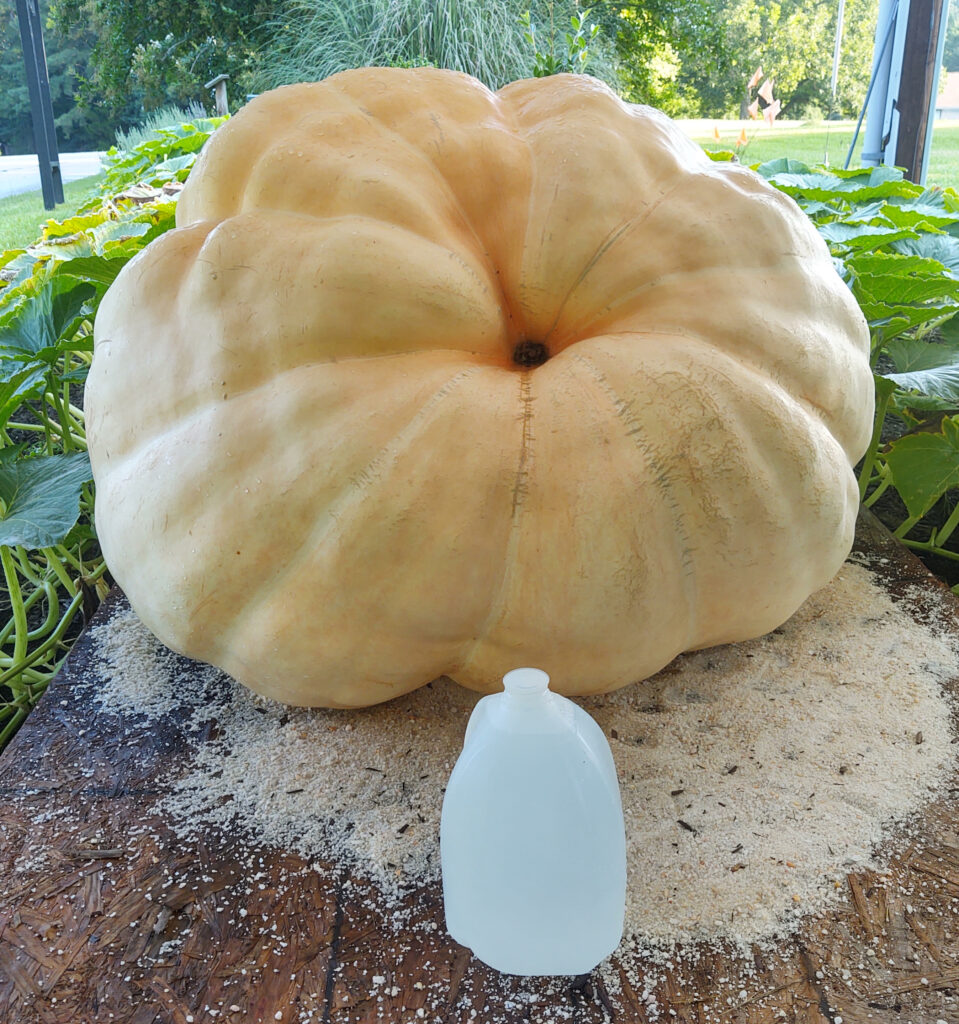 Our pumpkin now weighs 661 lbs. The growth has slowed a bit but nevertheless, the pumpkin continues to get larger and larger. We can’t wait to see what the official weight will be at the Spring Hope Pumpkin Festival in early October. 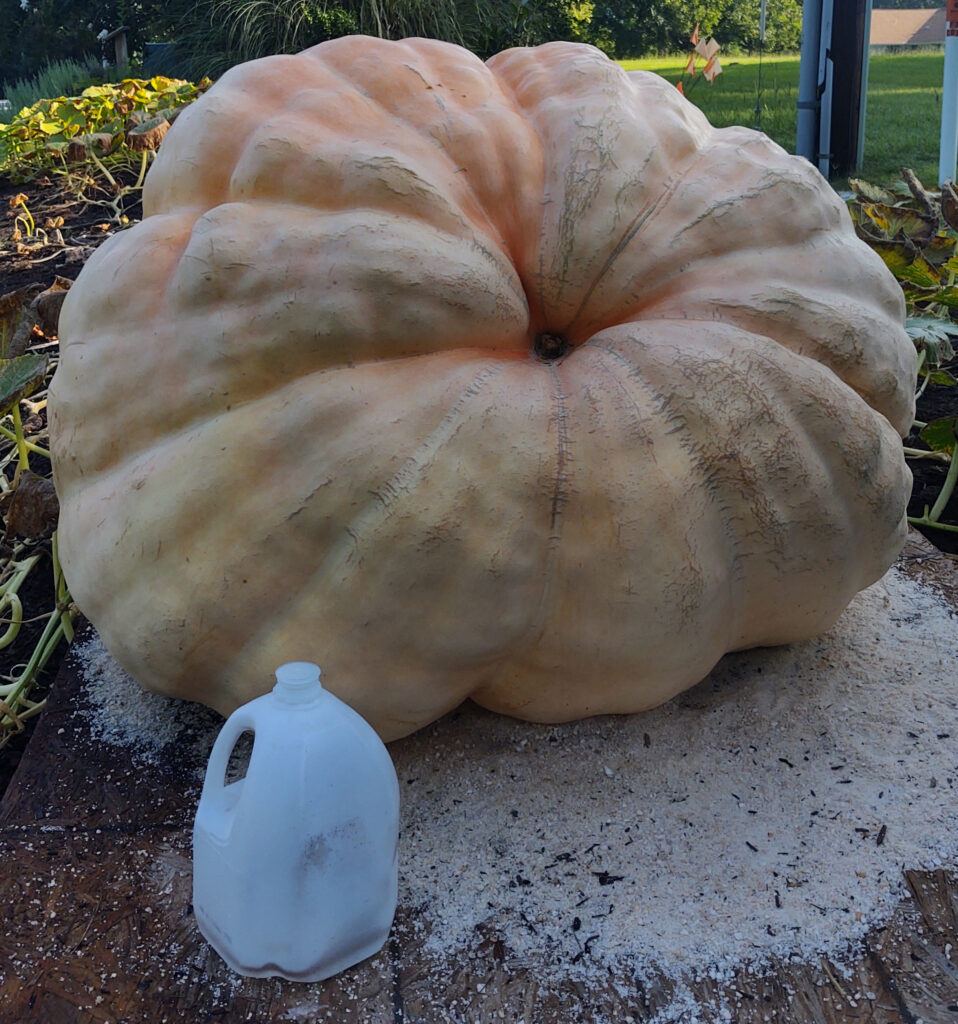 Our pumpkin is turning into a real whopper of pumpkin. It now weighs 741 lbs. Although the growth has slowed a bit it averaged a gain of 11 lbs per day this past week. Join us at the annual National Spring Hope Festival on October 2 where the pumpkin will be officially weighed. And, you’ll be able to help us name this mammoth pumpkin! 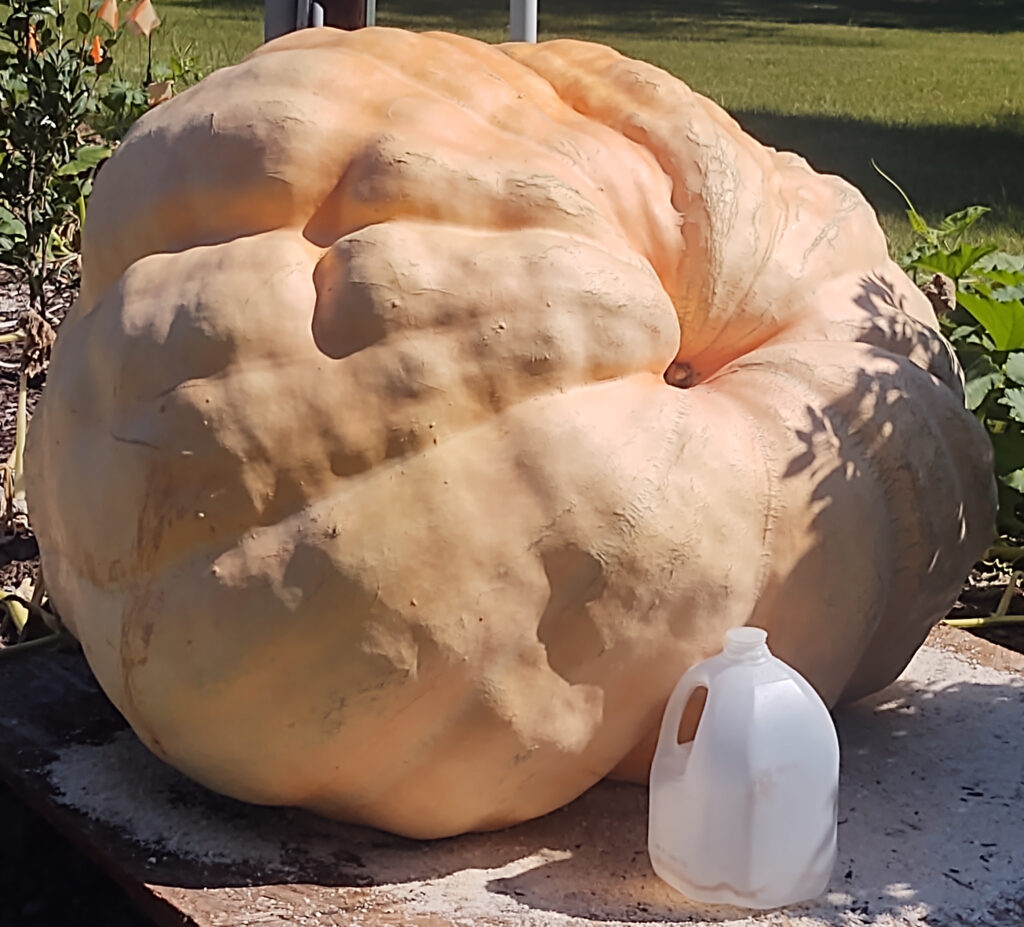