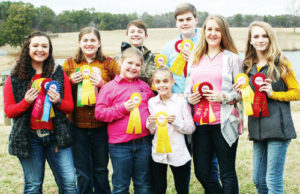 Nash County had a junior team and a senior team competing at the 2018 NC Junior Hereford Association Judging Contest, which was held on January 27 in Raleigh. As part of the contest, youth have the opportunity to evaluate cattle, sheep, pigs and goats. Pictured are members of the junior and senior teams for Nash County. On the front row (L-R) is: Payton Whitley and Taryn Reams, who were on the junior team. On the back row (L-R) is: Taylor Hall (Senior team), Olivia Daughtridge (Junior team), Cullin Whitley (Junior team) and Zac Keeter, Stacie Winner and Mikiahlah Specht, who were all on the senior team. (Contributed photo)