To assist w social distancing we ask that you communicate via email or call our office for further assistance. 252.459.9810.

Find this article at:
go.ncsu.edu/readext?461155
— Written By Maryanna Waters

Stink bugs can injure corn during the seedling stage, leading to tillering, stunting, and sometimes plant death. In order to prevent this, you must scout and spray at the correct time. Also, more stink bugs this year appear to have survived the winter compared to last year. The purpose of this article is to provide you the tools to do this. In order to do this properly, you must understand the biology of the insect. 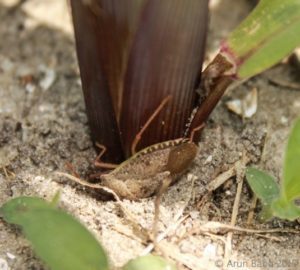 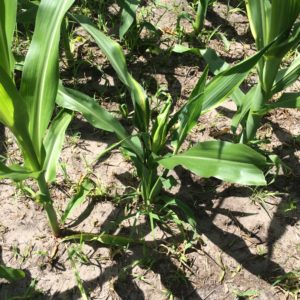 Stink bug biology as it relates to corn. Stink bugs begin to emerge from overwintering and move during March and April. This does not happen all at once and there are still stink bugs in overwintering sites right now (late April). The species of concern in seedling corn is brown stink bug. These insects overwinter in underneath plant litter and forest floors. They can move directly from overwintering sites into corn, but might stop off on shrubs, weeds, or wheat before moving into corn. Stink bugs cannot reach the growing point of corn until it reaches V3 or V4, since it is underneath the soil. In contrast, billbugs, which can cause similar injury, can reach the growing point as seedlings are spiking. Once the corn is at a stage where stink bugs can reach this growing point, they might move into fields. An exception might be in fields where the furrow didn’t close behind the press wheels, allowing the stink bug access below the soil. This can only be identified through scouting.

Where to scout?  Focus your efforts on the edge of corn fields near good overwintering sites, such as woods, grass, or with lots of residue. Because soybeans are a good late season host, numbers can be much higher in corn fields planted behind soybeans near good overwintering sites. Stink bugs will not move into fields before V3. Make sure that you walk into the field, since they prefer to be near the edges. Arun Babu (NCSU graduate student) has recently found that stink bugs taken from overwintering sites flew a little over ½ a mile on average in a day. So these insects can be pretty mobile.

Look at the base of the seedlings where the stink bugs feed. We don’t have a great threshold for stink bugs in seedling corn. One reason for this is that plant stunting or mild tillering is not as severe as plant death or major tillering. We’d be nervous if there were a stink bug on every 10 plants, or so.

When should you spray?  Stink bug movement doesn’t happen all at once and they can move in and out of fields. My recommendation, however, is to spray once they show up, rather than waiting for the last stink bug to arrive. Once the corn plant reaches V6, the growing point moves up past the soil line and stink bugs probably can’t cause much injury until the primary ear is determined (within a couple weeks prior to tasseling). So consider seedling corn stink bug-susceptible from V3 to V6.

What can you spray?  Pyrethroids can be very effective, especially early season. Don’t count on much residual, since the insecticide needs to contact the bug.